When feminist filmmaking was young…

Protesters are picketing the Miss America Pageant, and “consciousness-raising” groups springing forth. Demonstrators invade the home of The Playboy Club. Women are forging new ideas about gender roles, self-expression, and sexuality. As Women’s Liberation goes full-tilt boogie, new institutions and new leaders arise. A modern women’s movement is being born.

Pandora opened her box; evils flew free, but Hope remains. She stands with hand outstretched, inviting you to consider all the real and imagined prospects of this burgeoning feminist movement: Is biology destiny? Can you be anything you want? What do you want—to discover a truer self? To break the strictures of gender roles? To shatter glass ceilings?

Digital conservation with help from the Women’s Film Preservation Fund 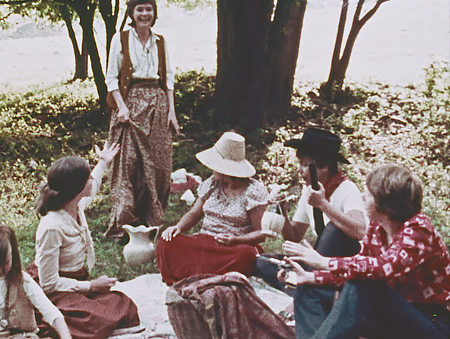 It was a lively time, and a time when the relatively low cost of 16mm cameras and film made it possible for many aspiring film-makers to launch their careers. Most chose the documentary route; my efforts were more idiosyncratic: The Women’s Happy Time Commune is fictional— comedy improvised within a loose story framework.

With an all-woman cast and crew…
The all-woman cast and crew was a first—an inspiration born of the times. People were attracted to such an environment. All involved, actors and production crew, felt their actions were significant—that they were makers of the new Herstory. The context was movie-making and also women-making.

I can’t remember how I managed to pay for the movie, but before production I do remember raising somewhere around $750 from friends in $50 “shares”. The shoestring budget was stretched to cover purchase of set-dressing supplies, outdated film stocks, and to pay special deals on rented equipment. The generous help and teaching of the many wonderful people running New York City film businesses made everything attainable.

Just before we left town to shoot “Women’s Happy Time”, Phil Pearle of Sound One taught our sound recordist how to use the Nagra recorder, lent us his (superb) Neumann mic, rented us our Arriflex camera, and showed me how to do an electrical tie-in without electrocuting myself. My learning curve was steep and swift.  The next day I was in the Virginia countryside— alone in a tiny church loft, lightning cracking and thunder booming as I clamped breaker-box leads to the (thankfully correct) terminals of an ancient power box.

The movie was shot — almost non-stop—over one long summer weekend.

Months later, editing complete, I went to Magno for the sound mix. There, Sol Tabachnick did the job in three hours flat – miraculously holding to what I could pay.   His speediness was indeed miraculous because, in my ignorance, I’d left gaps between soundtrack sections. When the first such silence hit— it was as if the projector had suddenly fallen into outer space—Sol turned into a whirling dervish, creating myriad insect-sounds to match and fill the myriad silences, and, all in all, setting a record for speed, efficiency and quality that will never be equaled.

If you’ve noticed that I’ve mentioned two male film pros and no women, that was 1970. The pioneering migration of women and feminist concerns into movie-making was only just beginning. Soon, female role models would sprout like mushrooms—magic circles widening and spreading. 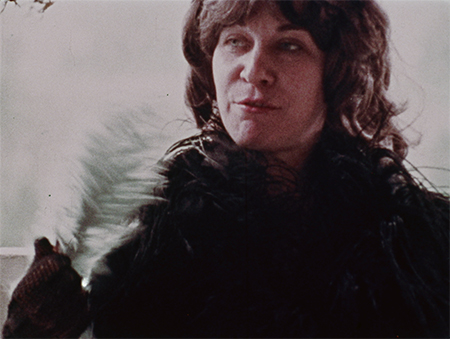 Are today’s public spheres tuned to female points of view? Would it be better if they were more tuned? If they were, what improvements might you see?

Gender…
Today, gender identity and gender transition—the potentially fluid nature of sexuality—is thought of as an individual’s dilemma or decision. But in the early 1970s, it was the very air and atmosphere that twitched to a new sense of indeterminacy in gender, gender roles and lifestyles.